By opting into the web form above you are providing consent for Omega Jiu Jitsu & MMA to send you periodic text messages. Standard rates may apply. You can reply HELP at anytime or learn more. You may opt-out anytime by replying STOP.
ACCESS OUR SCHEDULE
& EXCLUSIVE WEB SPECIAL 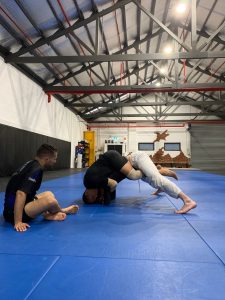 Everyone who sets out to learn Brazilian Jiu Jitsu has to start out as a beginner. If you’ve never trained in anything before in your life, you’ll have to start at square one with Jiu Jitsu. If you’ve trained in several other Martial Arts… you’ll still have start at square one with Jiu Jitsu. The beauty of this martial art is that everyone must simply begin, no matter where you’re at in your other training. That said, it’s reasonable to wonder whether Jiu Jitsu is beginner friendly or not. This is largely dependent on both the club that you join, and the attitude you bring to the experience. Here are some tips that can help beginners as they’re starting out in their first Brazilian Jiu Jitsu classes.

One of the most common reasons given for delaying signing up for Martial Arts, and particularly Brazilian Jiu Jitsu, is the belief that you need to get fit beforehand. In BJJ, no matter how fit we are when we first begin, we will spend a couple of years as a white belt. As the saying goes, the time will pass regardless, so you may as well get in and start. That said, doing some cross training to improve your strength, mobility, and cardio will always benefit your Jiu Jitsu performance, but don’t let a lack of previous training keep you from starting.

Customs vary from gym to gym and between all Martial Arts, MMA, and Kickboxing fitness centres, so the best thing you can do to be respectful of a new space is simply to ask someone. In general, you can expect that shoes are never allowed on the mats, and you’ll likely line up after each class to bow to the instructor and shake everyones’ hand. You’ll also hear people saying the word “oss” and fist bumping before rolling, but these are things you just catch onto over time, you don’t need to know any of it before your first Jiu Jitsu class.

Perhaps it seems sensible that beginners in anything come with a beginners mind, but we live in the age of instagram and youtube so you can bet that most people who show up to their first Brazilian Jiu Jitsu class have probably been following Mixed Martial Arts to some extent and may feel like they have a handle on Brazilian Jiu Jitsu. Brazilian Jiu Jitsu comes with a steep learning curve, which means it will be challenging and daunting, but if you have a beginners mind, you will learn a lot. Beginners mind means that you acknowledge that you don’t really know anything, and therefore you’re open to absorb everything. The moment you think you’ve “got it”, the learning stops.

This is a phrase thrown around a lot in the Brazilian Jiu Jitsu community and it’s especially relevant to beginners. If you don’t know what tapping means, it’s a literal or verbal tap you give to your partner to signal that they’ve successfully submitted you and that you are beyond escape. Tapping early doesn’t mean tapping out to avoid getting submitted, it just means not resisting the tap to feed your ego. There is nothing wrong with getting submitted and in fact, that’s how you’ll learn, especially as a beginner in Jiu Jitsu. If you try to push yourself too far before you tap, you might end up with a nasty injury and have to miss out on training as a result.

In general, be safe, don’t spaz out on people, and don’t treat class time like a competition.

Watching Mixed Martial Arts and Brazilian Jiu Jitsu on the Internet is both fun and informative, and it’s important not to try to apply what you see online on your training partner if you don’t know what you’re doing. When you’re watching Martial Arts online, keep in mind that these people are experienced and hopefully know what they’re doing when they’re applying submissions. If you try to pull off a heel hook on another beginner, you’ll probably go too far, they probably won’t tap early enough, and you’ll end up ripping their knee apart and ruining their Brazilian Jiu Jitsu journey before it began.

It’s also important to remember that there are many ways to do the same technique, and new techniques are being created all the time. If your instructor teaches it differently than you’ve seen on the internet, it doesn’t mean they’re doing it wrong and you know better. Keep watching things online, but keep showing up to class with an open and eager mind.

Chances are, once you get a taste for Brazilian Jiu Jitsu, you’re going to want to come back, often. Find a gym near your house or your work so you can prioritise training as much as you’re able to without adding on too much commute time that will cut into your other commitments.

Some Mixed Martial Arts and Brazilian Jiu Jitsu gyms have beginner specific classes and some have mixed level classes in which you will be partnered with someone more experienced who can help you.  Check with the gym ahead of time as some gyms may be more of a competition gym with people training at higher levels, while others have more white belts and people starting fresh. Some gyms are beginner friendly by offering multiple levels of memberships. For example, you might start on a 2-day per week membership as you’re getting accustomed to training, and later you may upgrade to train more days. There is no correct way to start out, it’s more important that you like the vibe of the club and the people in it.

Some Brazilian Jiu Jitsu clubs require you to wear specific uniforms branded to their Martial Arts gym. This is tricky for a beginner who just wants to get a feel for it, but can also be helpful in getting people to commit and get more out of the training, while having a sense of belonging. Check if the gyms will lend you a Gi or allow you to train in your own gear at the beginning, and if they offer intro classes for you to get a feel for the space.

For the first few classes

The main thing is, just show up. But there are a few pointers that are helpful to know, and might make your first day a bit smoother. Make sure you and your training clothes are clean, eat a light meal an hour or two before class, don’t walk on the mats with your shoes on, and don’t go too hard if you’re rolling. You’ll likely be expending a lot more energy than you’re used to when you start doing rolls, so make sure you’re getting some electrolytes and proper meals into you, as well as more sleep than you’re used to. You’ll need added recovery measures in the beginning while your body gets used to Jiu Jitsu (although it never really does). Welcome to the world of Brazilian Jiu Jitsu.

If you live in or near the suburbs of Collingwood, Fitzroy, North Fitzroy, Abbotsford, Carlton, Richmond, Melbourne, Clifton Hill, Brunswick, Brunswick East, Thornbury, Northcote, give us a call today and get signed up for your first Brazilian Jiu Jitsu, Wrestling or Kickboxing intro class.